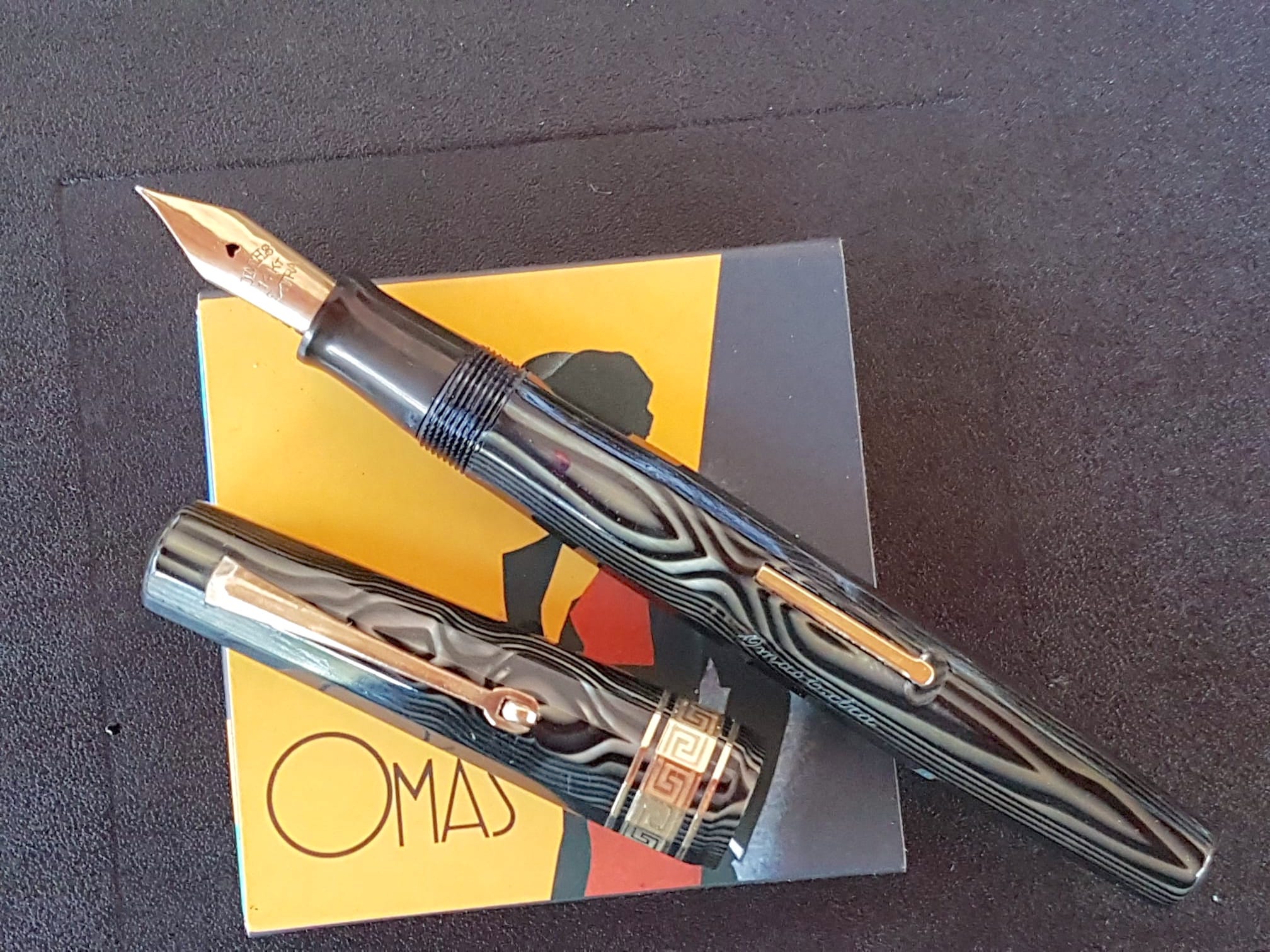 EXTRA derives from Latin and its meaning is “ beyond the scope of, in addition to what is usual o expected”

Extra is actually the comparative of “Ex” which means “external”, “out of”.

One of the most common uses of the suffix extra is in the adjective “extra-ordinarious”, meaning extraordinary, unusual.

In Italian the word “extra” has acquired a wider meaning,  drawing from the adjective “extraordinary”, thus  emphasizing the perception connected to something which is unusual, somehow better than ordinary, rather than the sense of external or additional.

The word Extra has been widely used by pen makers in the past. It is a short word with an “X” which makes it sound  somehow exotical and with a foreign appeal. This denomination seemed therefore perfect to give  an “extra” appeal to pens.

We have Montegrappa Extra, Radius Extra, Aquila Extra and many other denominations where the word extra is the indication of a model being part of a top line; “extra” threrefore underlines the meaning of “best”, “out of the ordinary”, thus “extraordinary”

Omas used the word Extra for the first time for its early very rare Ogiva shaped button fillers and Duofold lookalike pens ,  and kept on using this denomination for many years.

In the picture below, a very rare Omas Extra Ogiva button filler in jade green celluloid. Only two colors are known of this model: jade green and caramel brown. 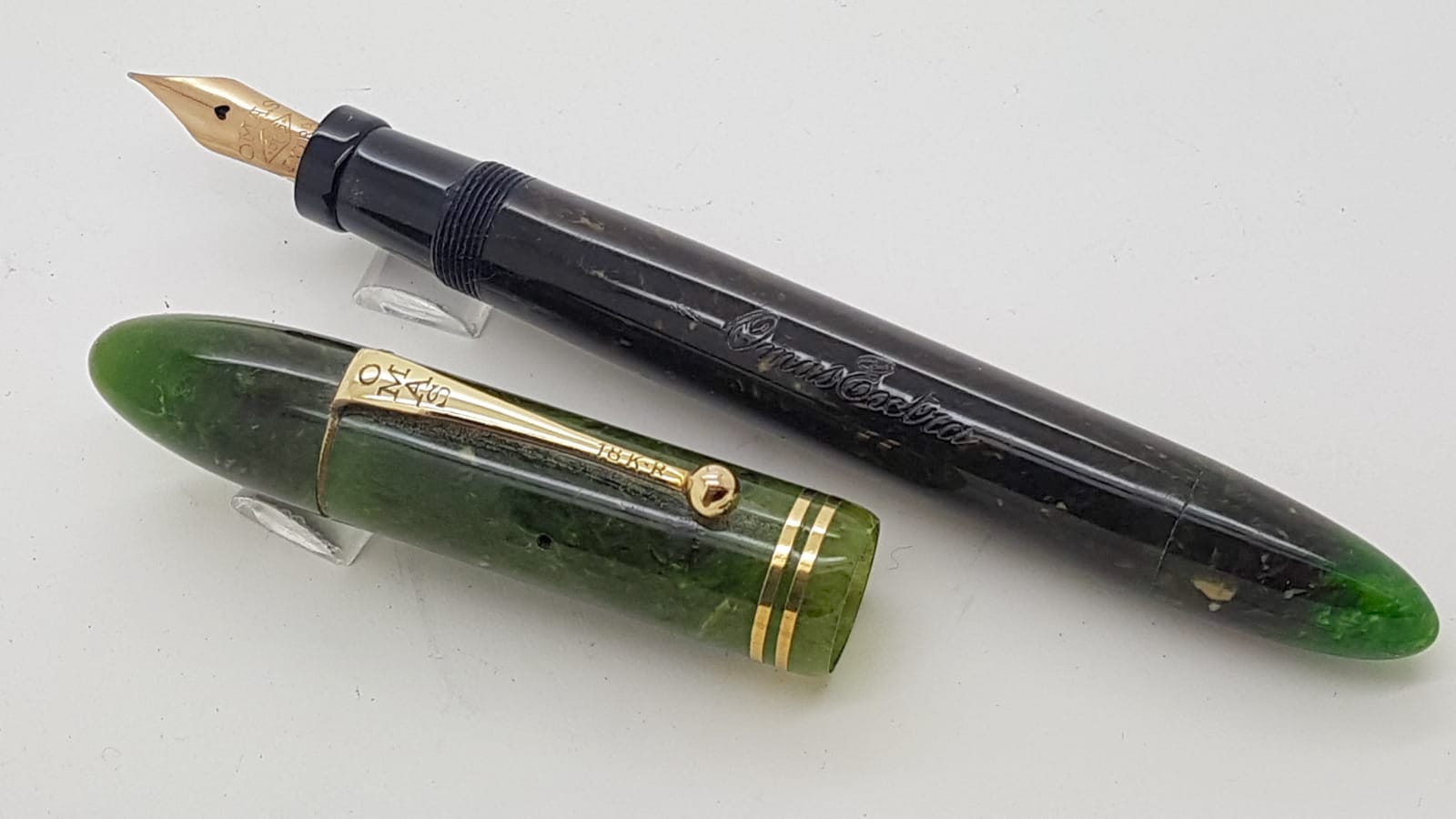 It is therefore necessary to identify various  Omas Extra models according to their filling mechanism and design.

The first Omas Extra pens were button fillers produced in two sizes only. They were fitted with the earliest and today extremely rare Omas Extra 14 ct gold nibs with a typical graphic with many swirls. Later nibs were used on these pens, too.

There are many hypothesis on the “originality” of the engravings on  the barrels of these pens. As many exist which have very large barrel imprints. Most of these pens have however smaller barrel imprints which are very similar in design and shape to those which can be found on Extra lever fillers introduced in 1932.

Rumors has it that a number of fake Omas Extra pens were marketed in the late 1980s in Italy, using components and celluloid coming from other pens while only the clips were part of a stock found somewhere in a shop…

I have never found enough evidence to support this theory and comparison between Omas Extra pens with small engravings and large engravings has shown that components are absolutely identical with the size of the barrel imprint being the only noticeable difference between them.

In 1932 Omas introduced their new lines of Extra  models, which were lever fillers, manufactured in three sizes, with cylindrical and facetted design.

The Extra Lever fillers had a roller clip and a typical design which has  remained one of Omas’ distinctive features for years.

In the pictures below: a very rare early Omas Extra button filler in mahogany celluloid with large imprint; a group of Omas EXtra lever filelrs in a variety of colors and an Omas Arco gray lever filler. 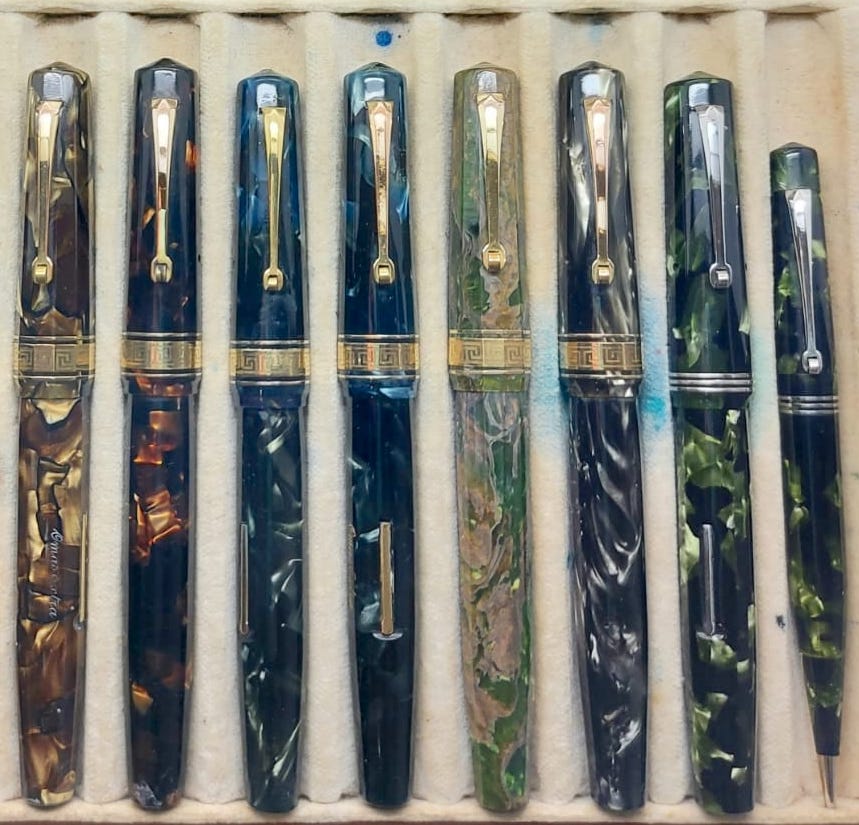 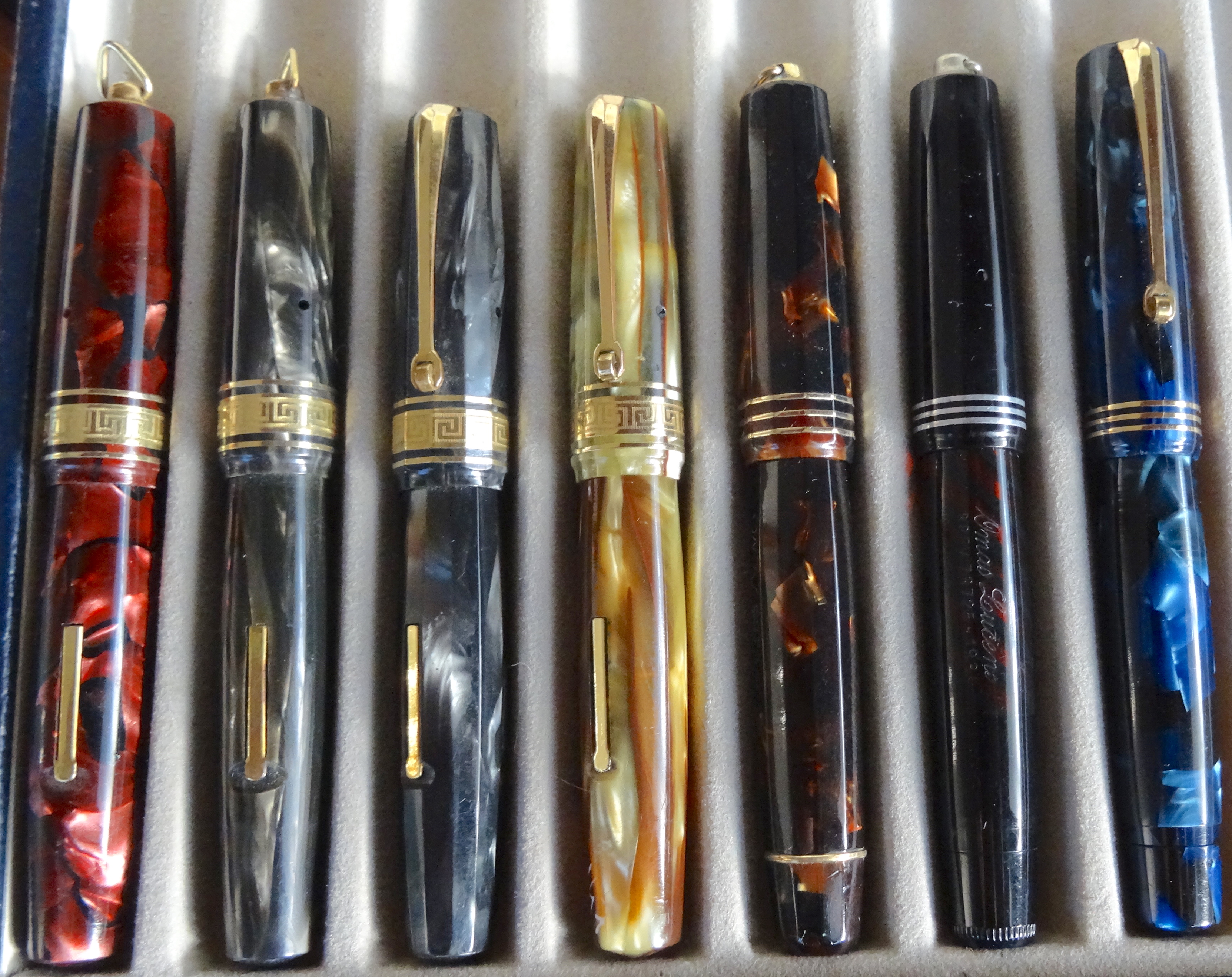 The word "extra" was used once more in 1939 when Omas introduced the new facetted line of plunger fillers to flank the revolutionary Lucens line.  The word “lucens” comes from Latin and it means “shiny”, “bright”, “full of light”, to underline the transparency of the barrel. The new pen was called Extra Lucens,  which can be intended both as “more than Lucens” or “beyond Lucens”, be it “better” or “more shiny”, for the facets enhance the shine and brightness of the barrel. 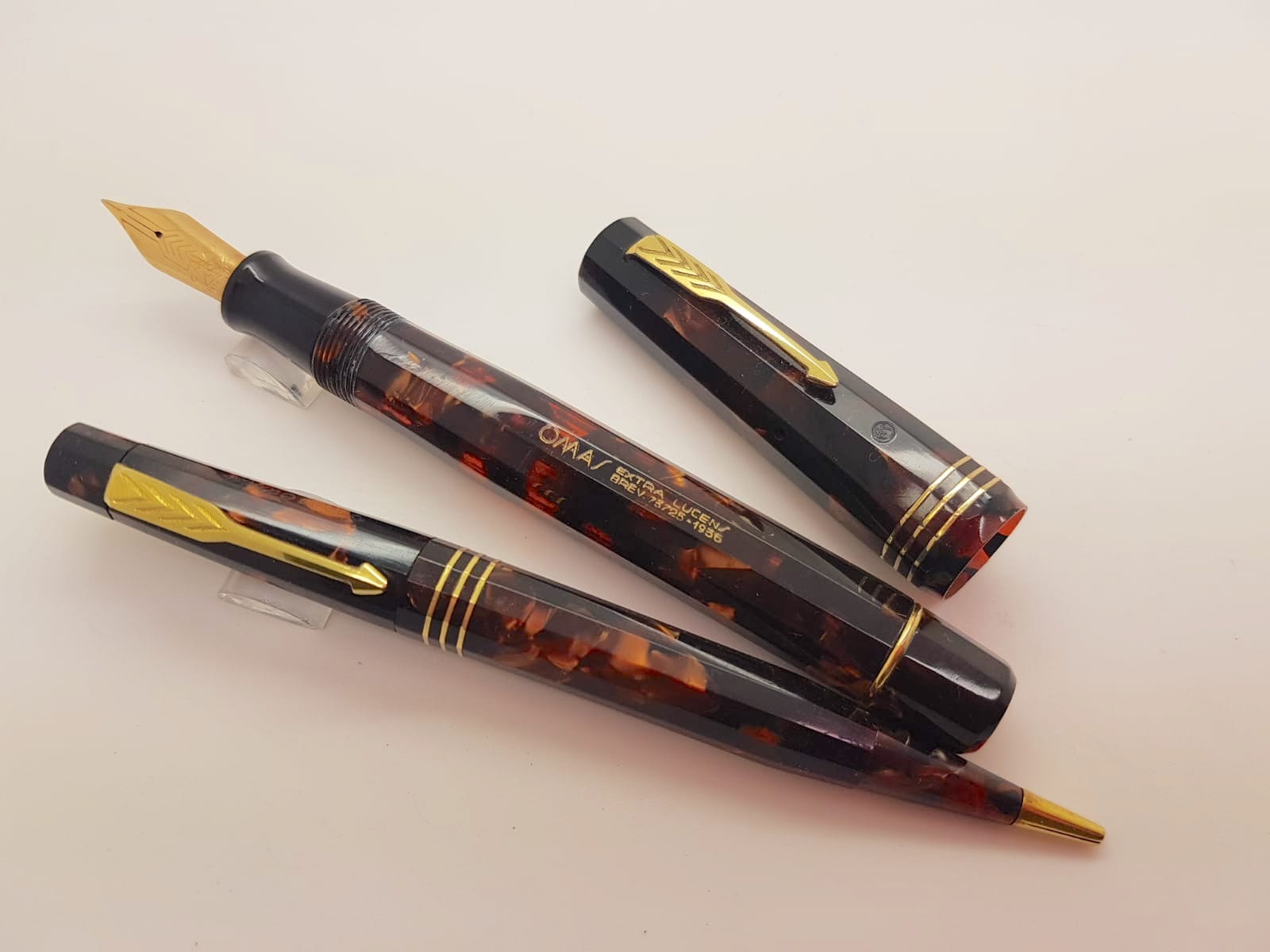 Omas used the word "extra" once more in 1946 when their entire top lines of pens was restyled and the plunger filling system was finally replaced by the  piston, easier and less complicated to use.

The new line of pens retained the typical Omas design mutuated from Extra lever fillers and Lucens pens, with only minimal design changes due to the presence of the piston.

These Extra piston fillers were manufactured in three sizes, colors were jet black, gray pearl, cappuccino (a  very rare creamy light caramel color with brown streaks), arco gray and arco bronze. They are pretty rare today as they were produced for a couple of years only. The  models were numbered according to size and the complete denomination is Extra 55X, were 555 is the smallest size, 556 is senior and 557 is oversize 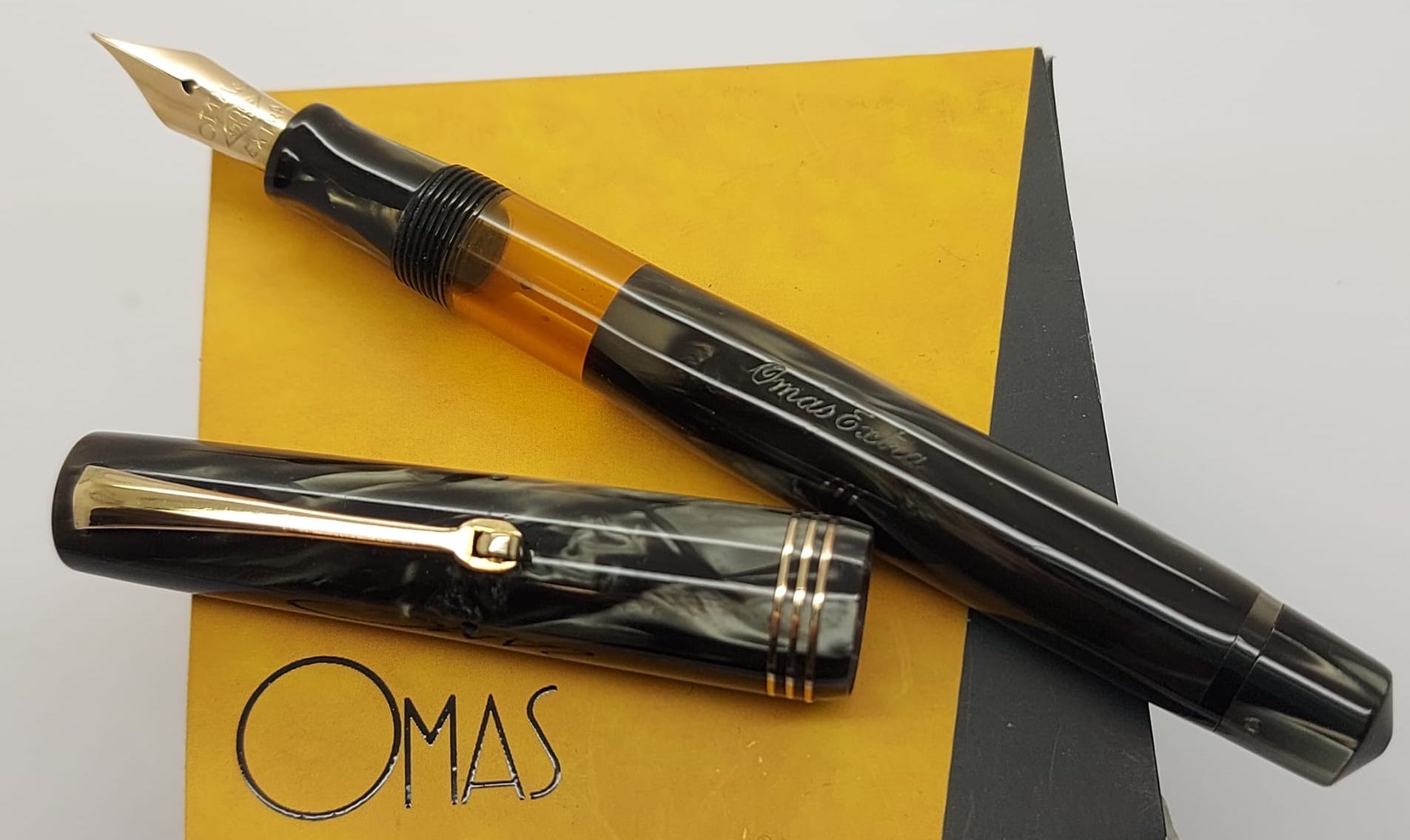 A total restyling of the lines was undertaken in 1948 and Extra models were totally transformed to acquire a more modern and fashionable look .

Cylindrical pens became ogival, with a straight clip, a single wide cap band and a very aerodynamic look, while facetted pens lost the transparency of the barrel and were fitted with a similar clip which had a diamond profile; the sigle cap band was adopted for the facetted pens, too. These models are called Omas Extra Ogiva. 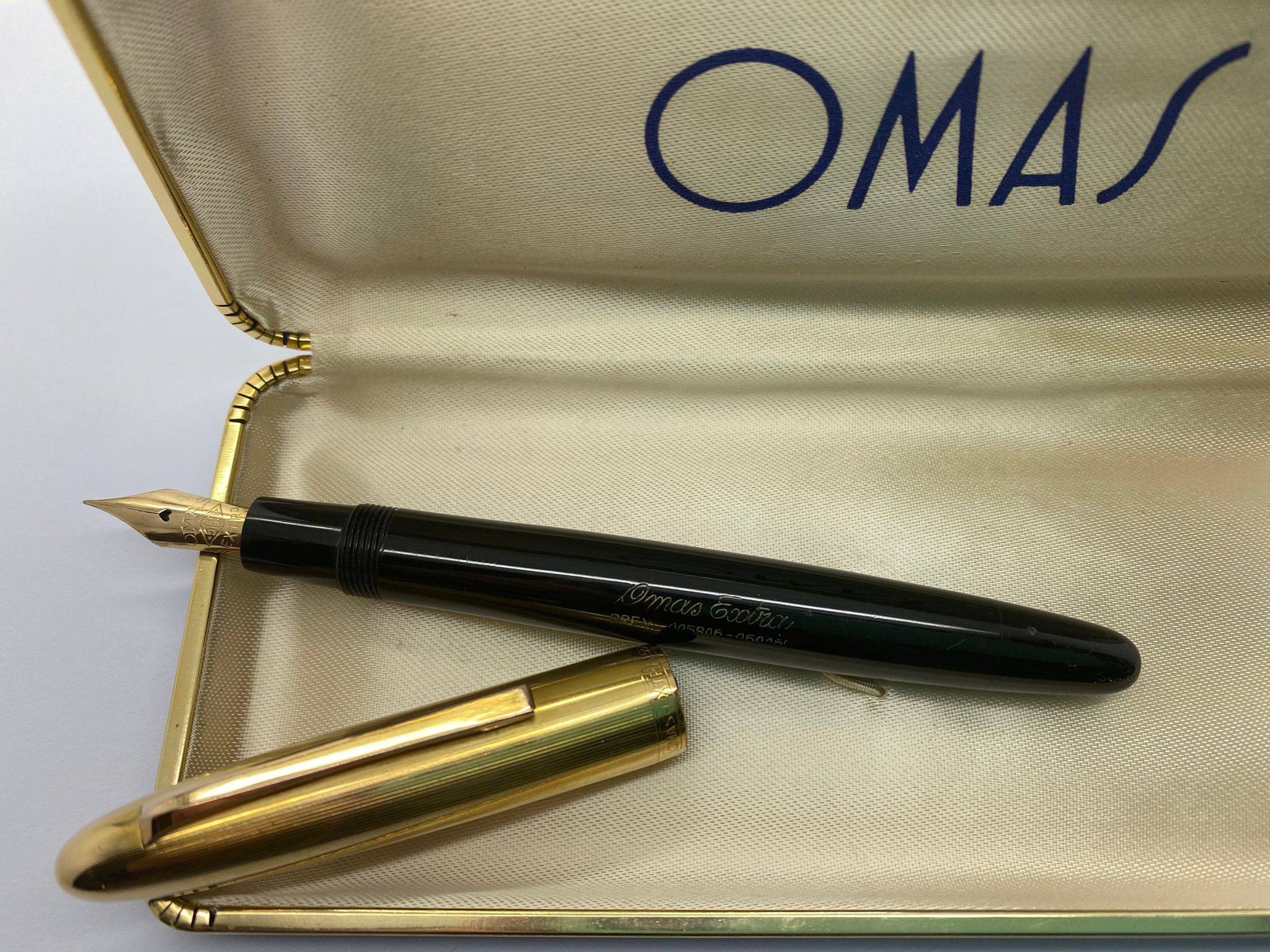 Ogiva Extra models are very similar but not identical to the later Extra 55X models which would become Omas leading models in the following years. 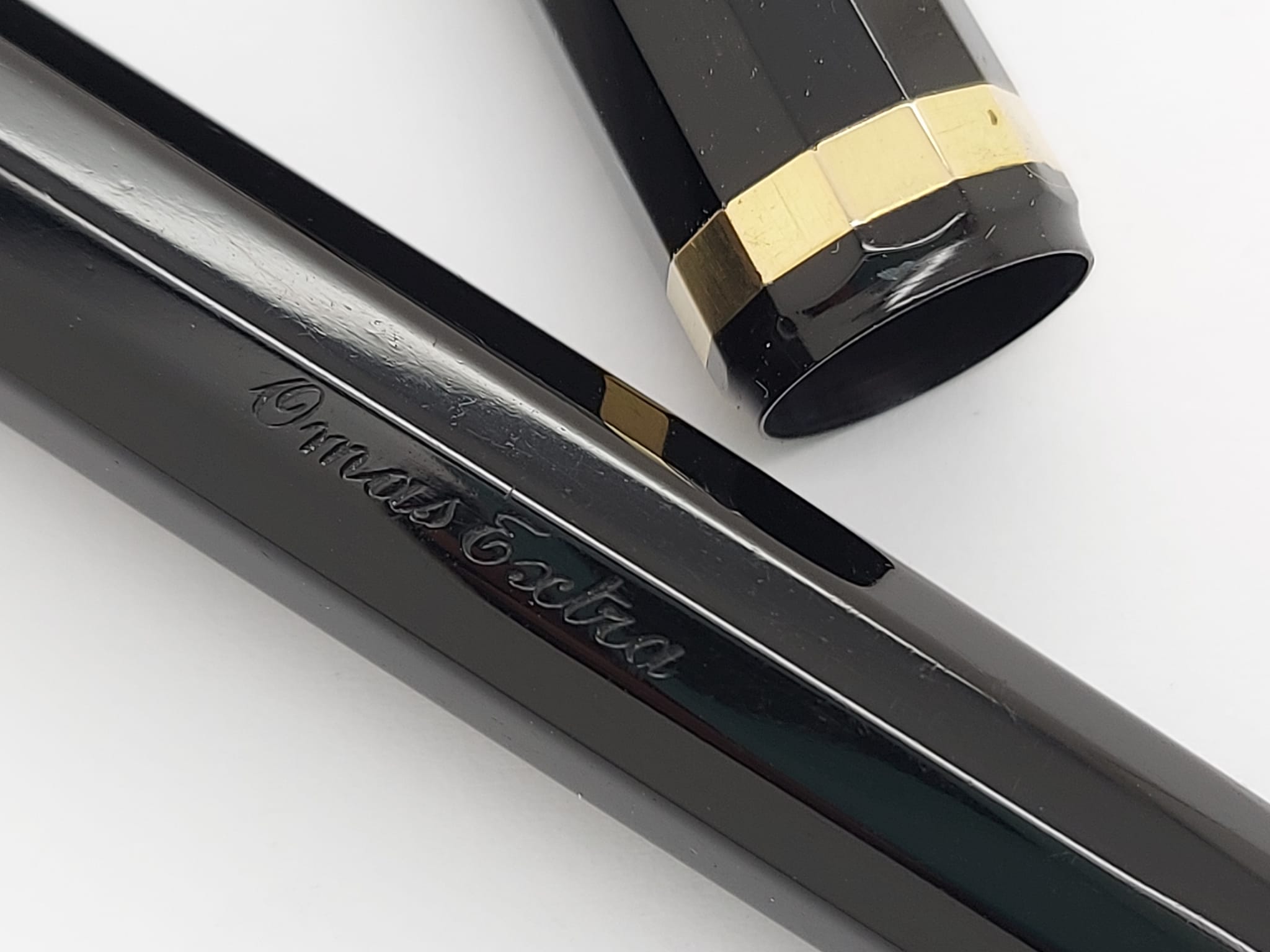 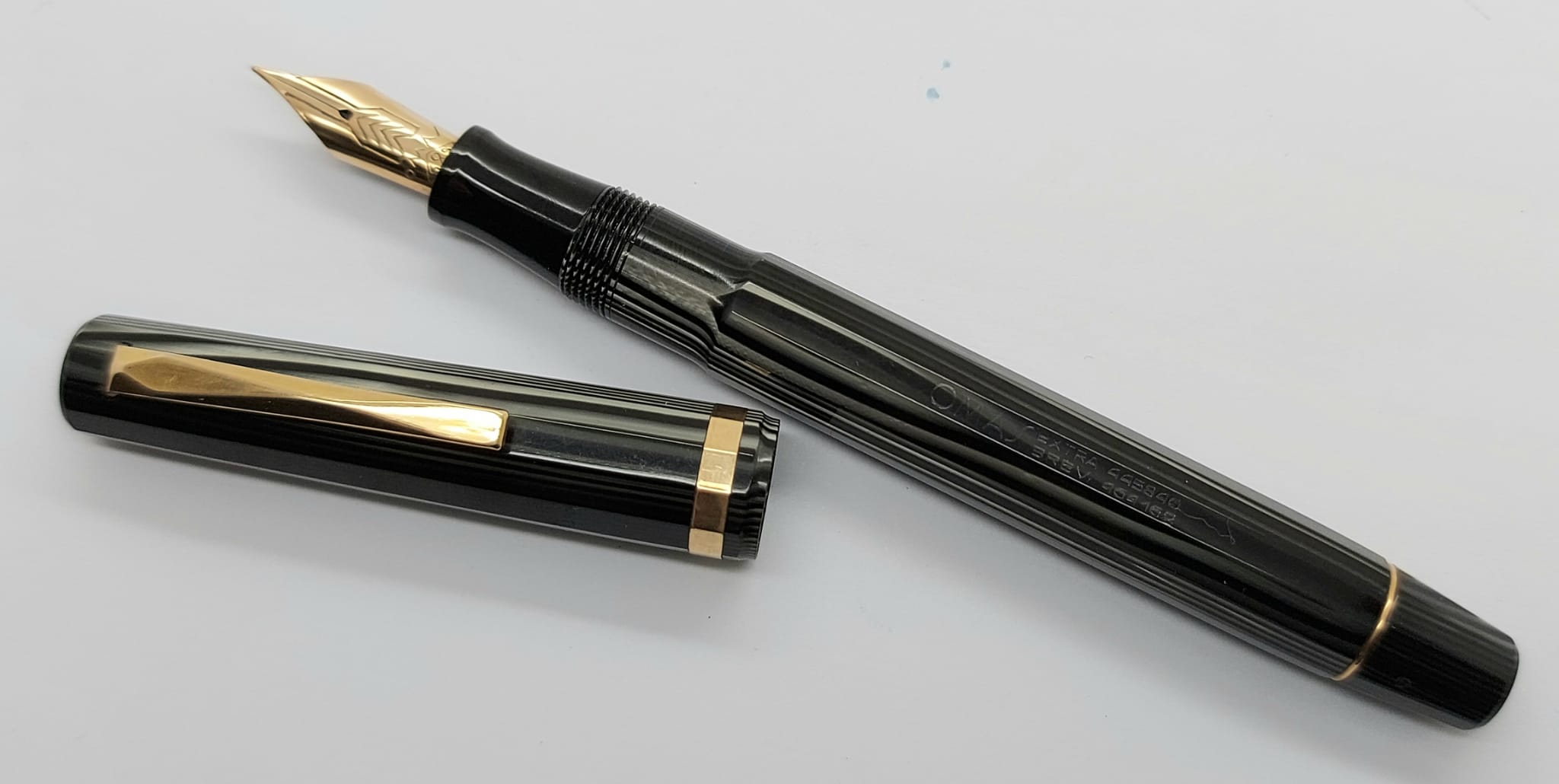 The Ogiva shaped Extra models are slightly thicker than 55X later models. They exist in the same versions as the 55X line: full black, with gold filled cap, with gold filled cap and barrel. Omas Extra Ogivas were produced in cappuccino celluloid too. This color was later abandoned and no examples of it  are known in the lines of 55Xs of the following years with the only exception of 555 models where examples in cappuccino celluloid are known.

The line of Omas Extra Ogivas remained in production for a very short while and was soon replaced by the Omas 55X series. 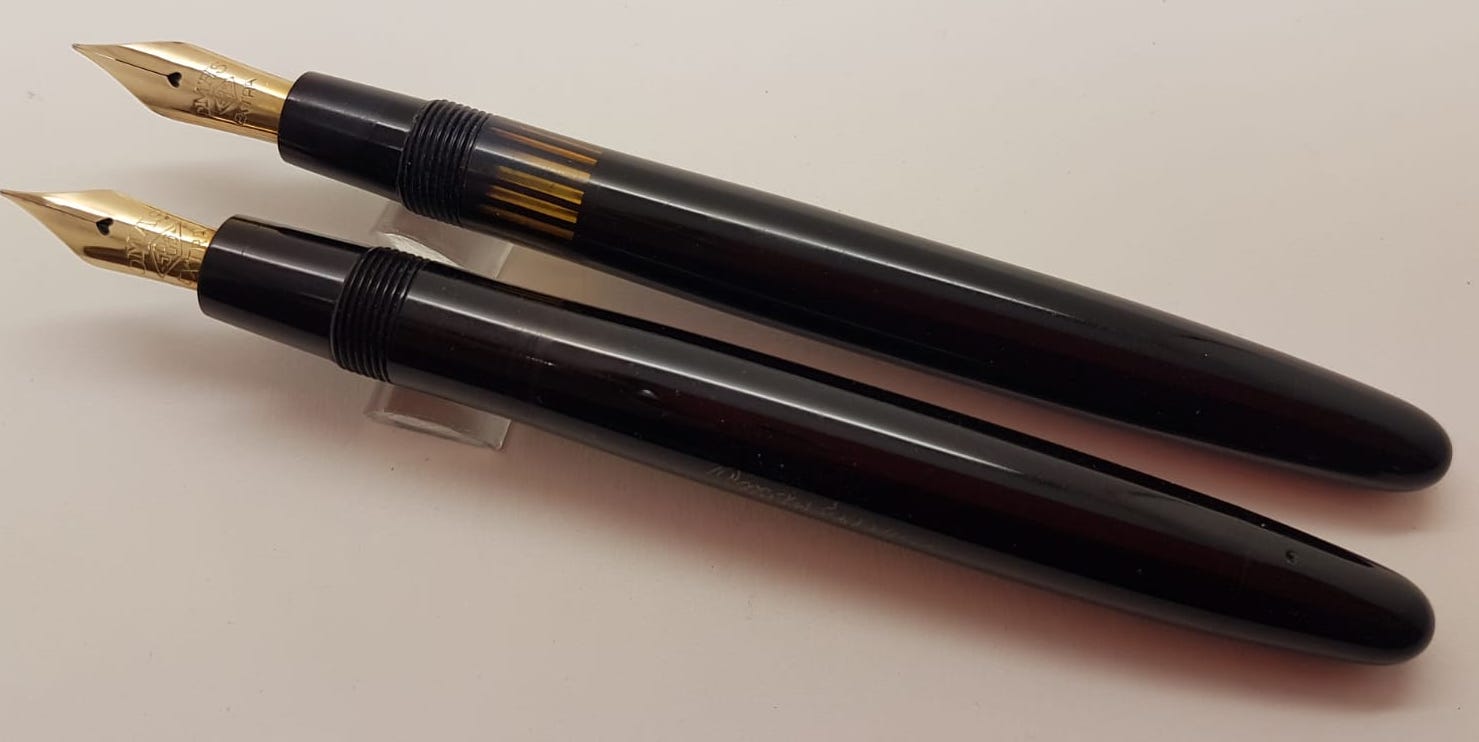 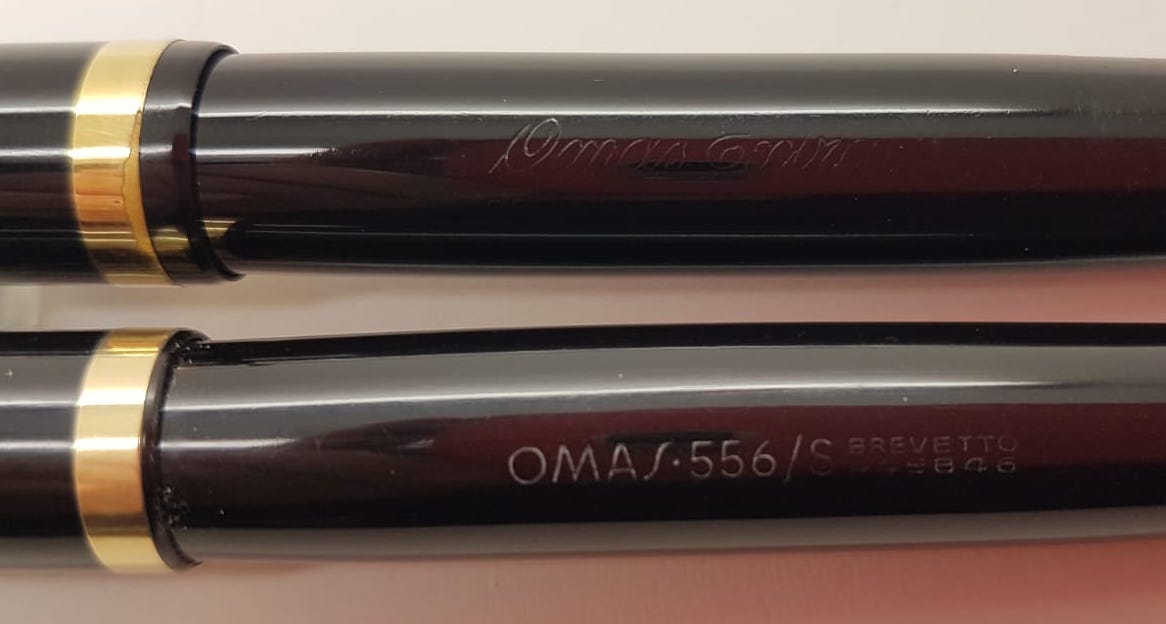 There are some slight differences in the design of Omas Extra Ogivas and later Omas 55Xs: the clip on the Ogivas is placed lower on the cap than on 55Xs, the cap lip is  flared below the cap band, while 55Xs have a very short and straight cap lip.

The line of Extra Ogivas remained in production for a very short while and it was soon replaced by the 55X lines. Barrel imprints were changed with the model number finally appearing in the barrel imprints of cylindrical pens and the name Extra being included in the imprints of facetted pens.

The imprint on the barrel was not changed for the 557, which remained Omas Extra with the old style and the patent number.

The design of the pen was however slightly reviewed with the clip being positioned higher on the cap and the cap lip being shortened, loosing the classical and old- fashioned flared design. 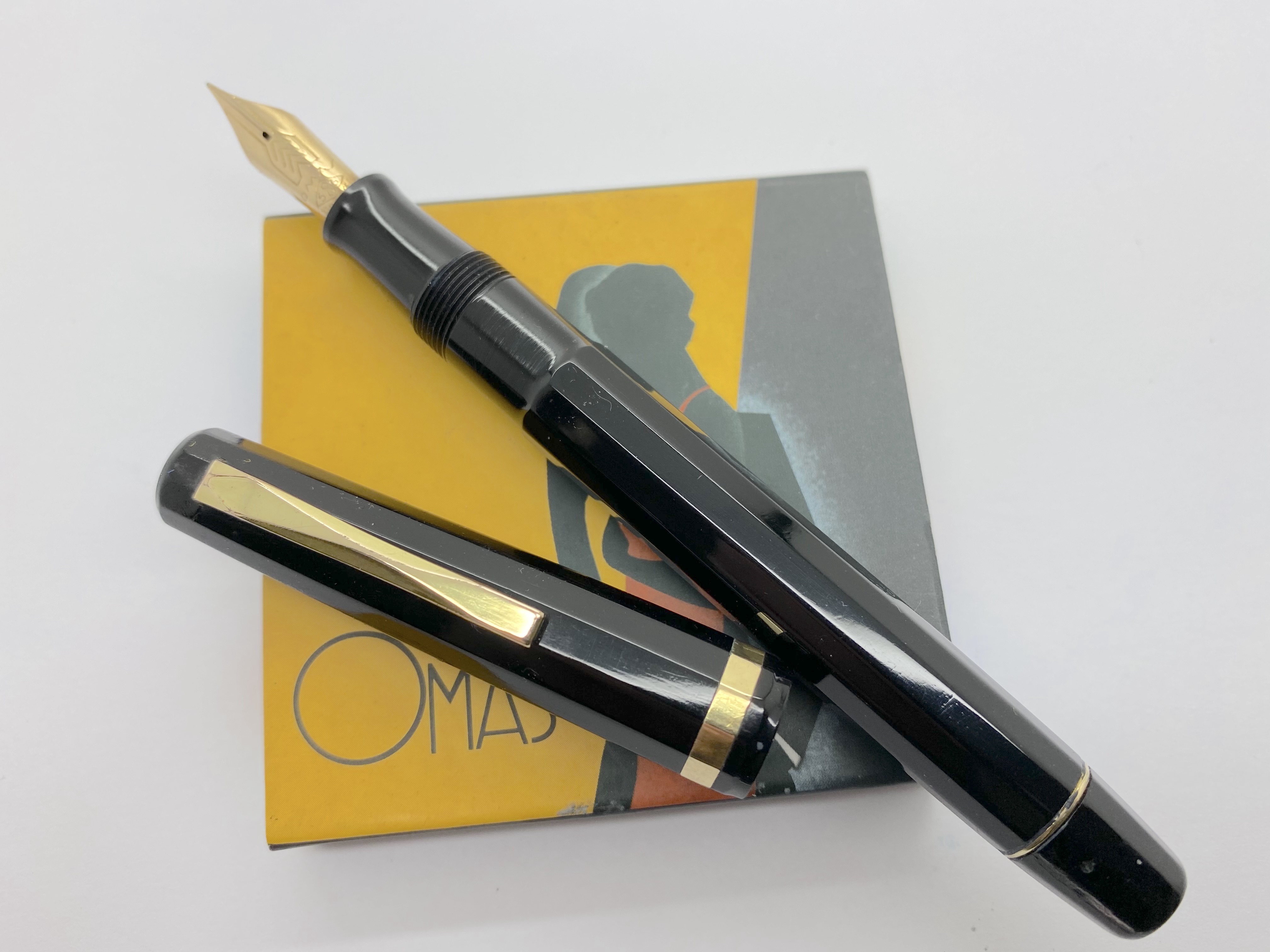 This line of pens was produced in black, pearl gray and tortoise brown which was used for facetted pens only; the latter, along with gray lined/arco celluloid, was never used for cylindrical pens but only for faceted models. A  couple of extremely rare examples of 555 and 556 in blue celluloid are known but they are probably prototypes which were never marketed. The line  remained in production till the 1960’s when Omas renewed their lines once more with the introduction of the Gentlemen, Milord and Dama models. 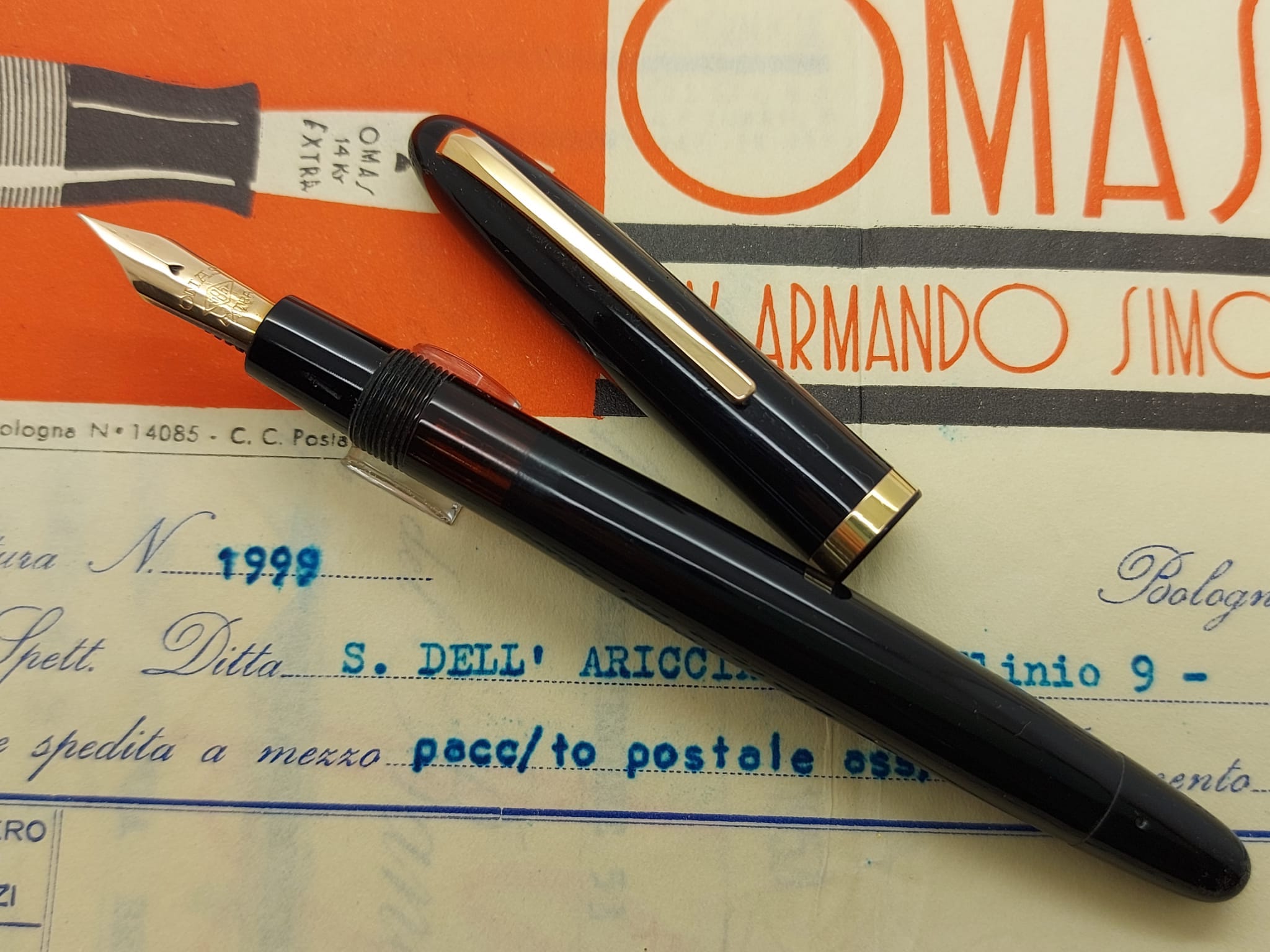 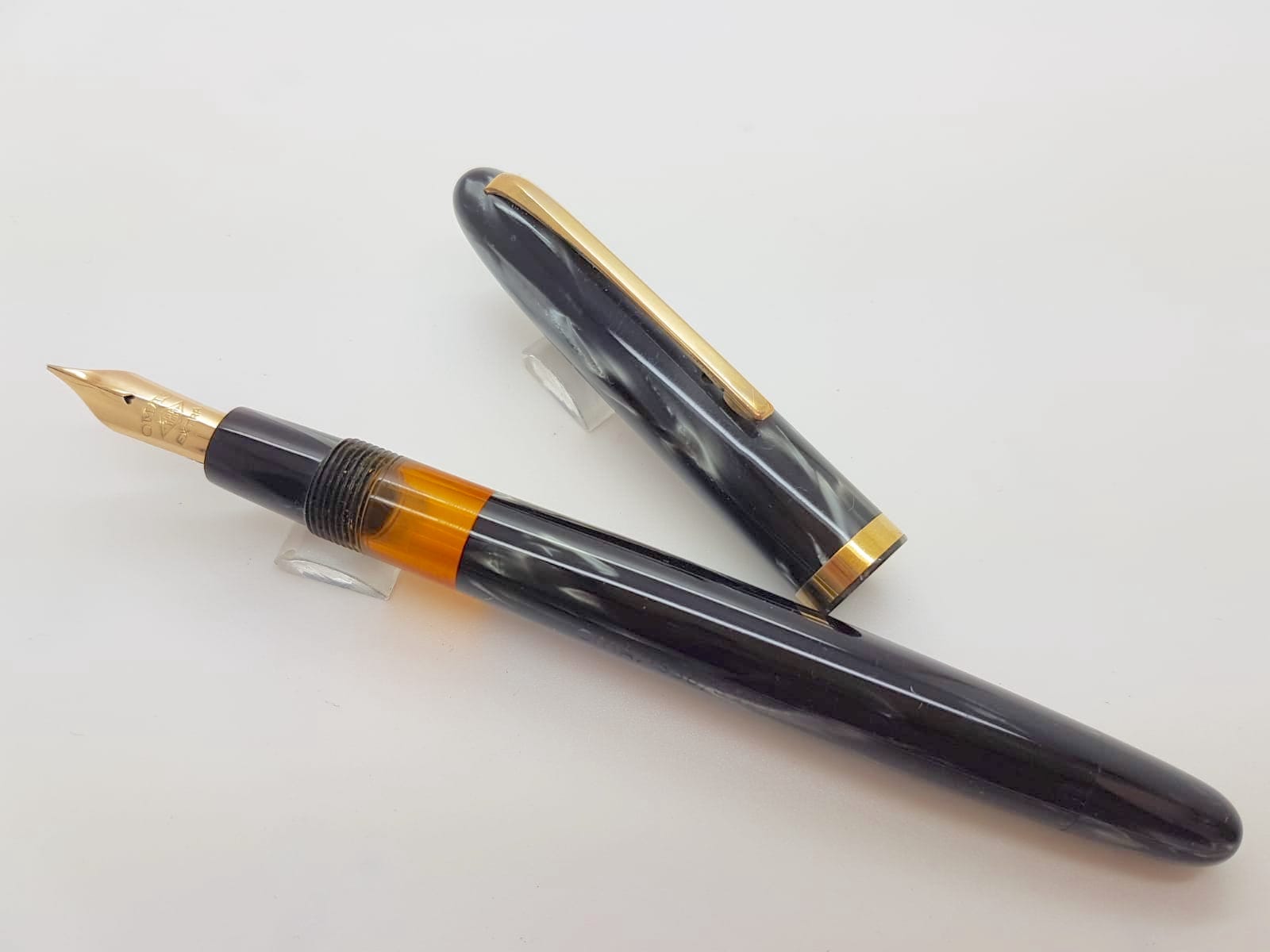 The suffix “extra” was however never abandoned and we will find it back on Omas barrels  in the 1980’s again. 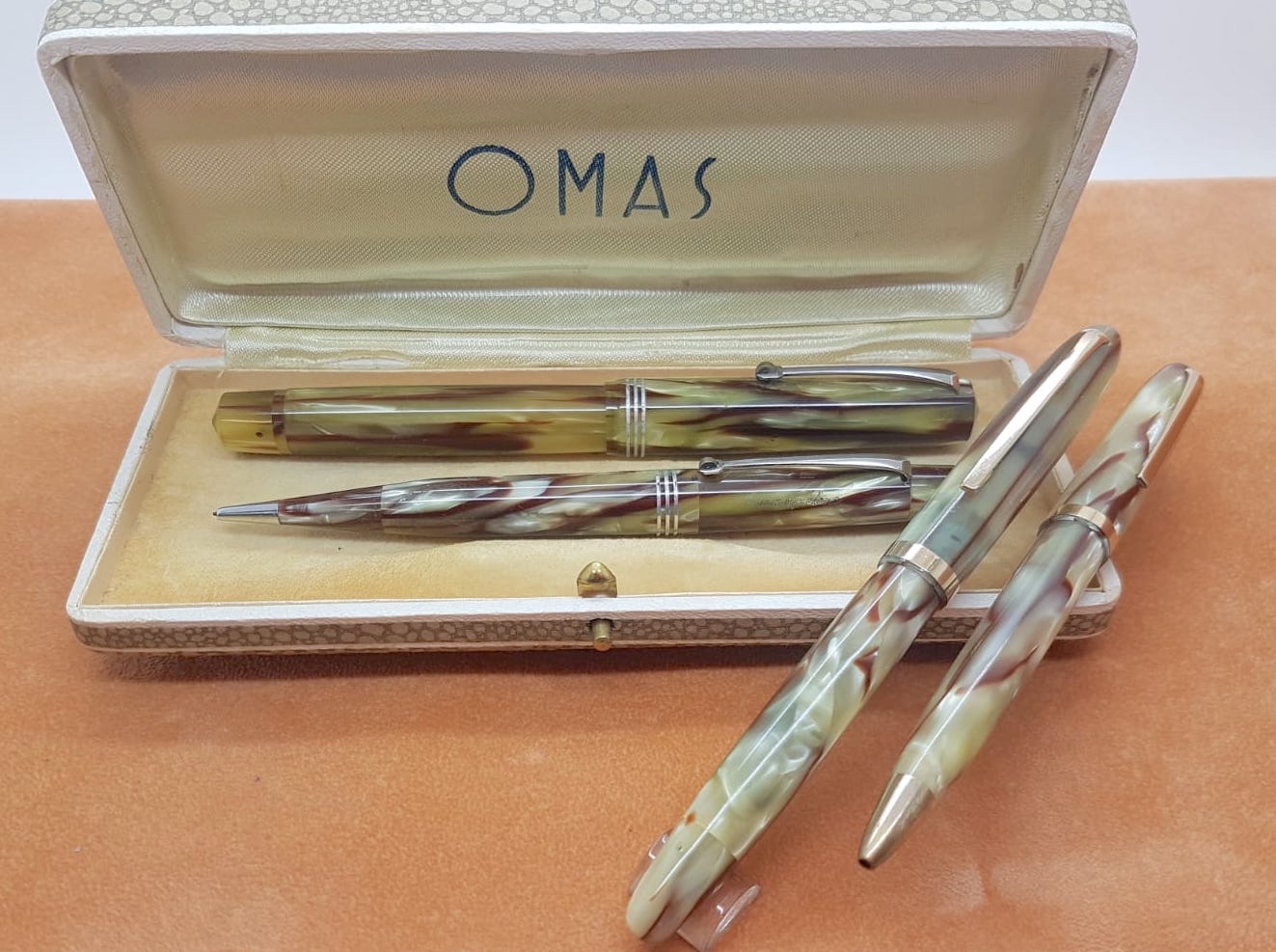