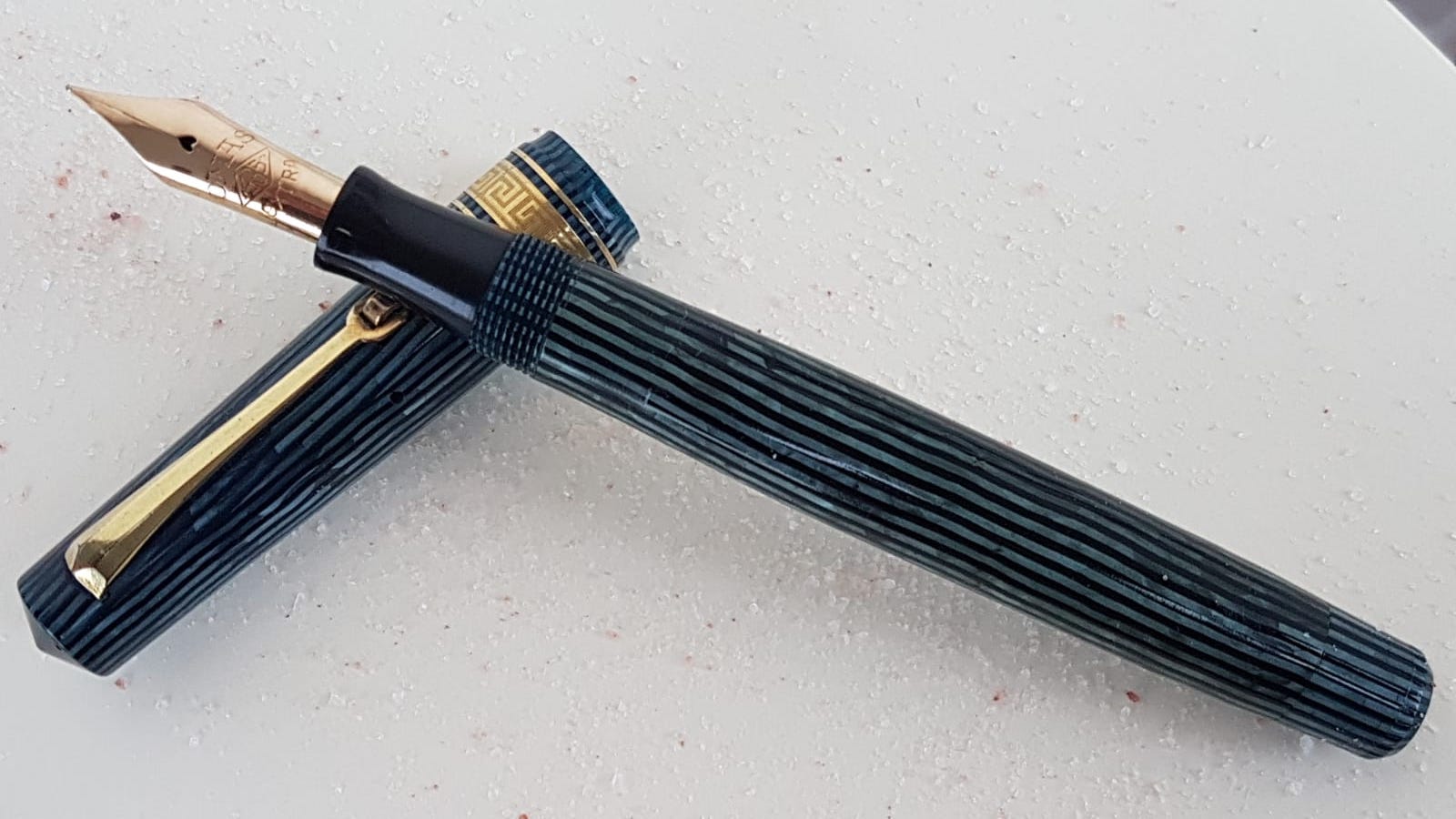 This article was written for a seminar on Italian pens  I held at the Pen show in Washington D.C., Aug. 2019

In 1936, when Omas introduced the Lucens model, the market already offered a number of models with transparent barrel and ink visibility.

The first company to explore this new technology had been Pelikan. As early as 1929, Pelikan had in fact introduced the 100 model, a piston filler with transparent window which allowed for great ink capacity and ink visibility.

Following Pelikan’s example, other companies had patented mechanisms which finally set pens free from levers or buttons. In the USA Parker had introduced the Vacumatic in the early 1930s, soon followed by  other big companies like Conklin and Wahl. In the UK, the Visofil model by Mabie Todd was introduced in 1934 and finally, Montblanc had adopted the telescopic piston in 1934.

So, Omas was perfectly in line with the general international trend towards transparent pens with large ink capacity. 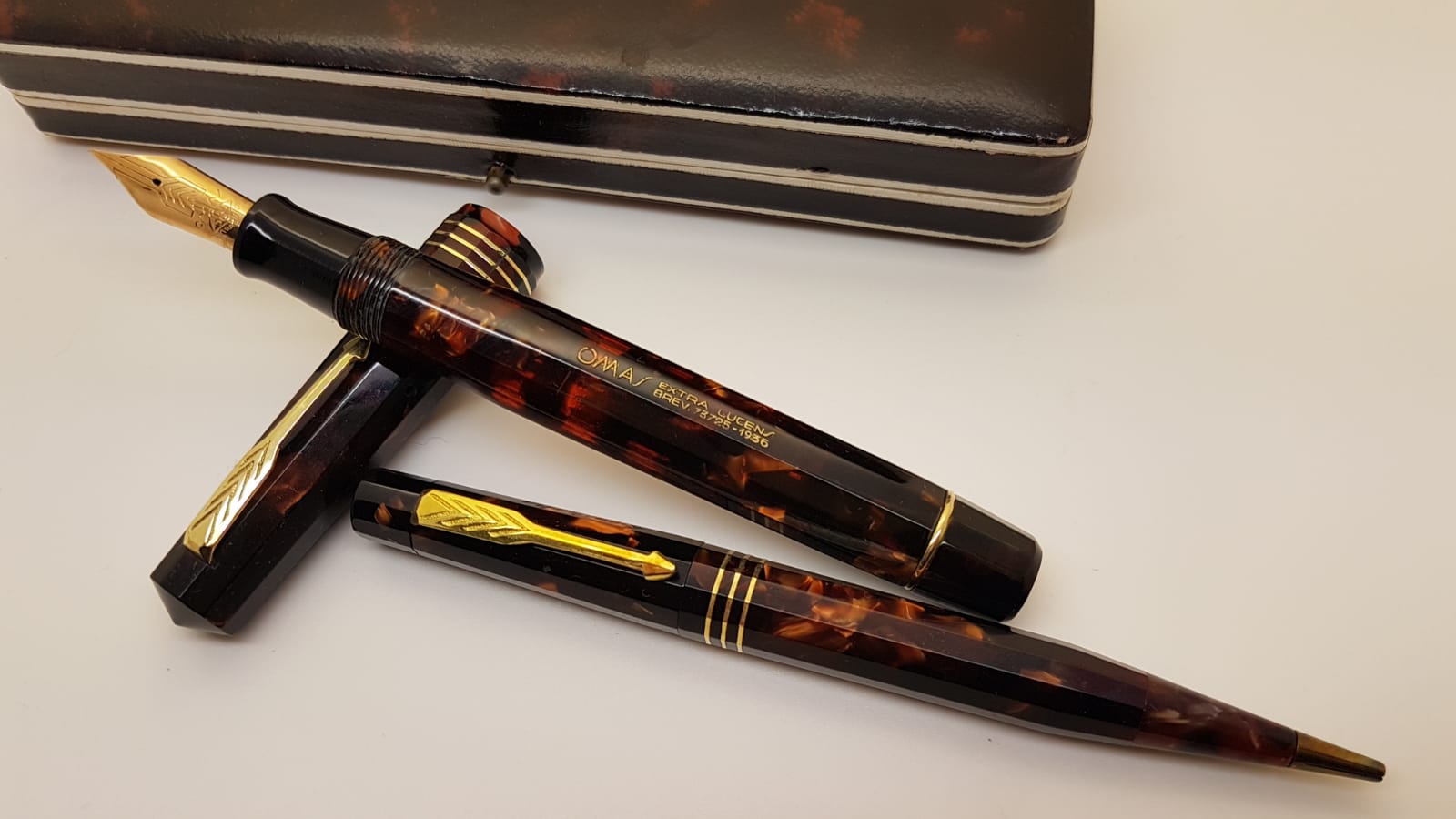 Early Lucens models had a black cap top and a black turning knob. Soon this feature was  however abandoned in favor of single piece caps and turning knob in the same color as the barrel. Early Lucens with this features are much less common than standard ones as they were produced for a very short span of time.

The range of colors was wider in reality than what the catalogues of the time illustrate.  Collections have shown that a line of Lucens pens in at least two sizes ( senior and medium) was manufactured in blue striped celluloid ( same celluloid as the one used for the Minerva Classica) both with black cap top and black turning knob and with single piece caps and matching turning knob. It is not unlikely that in the years to come, new colors may be discovered. 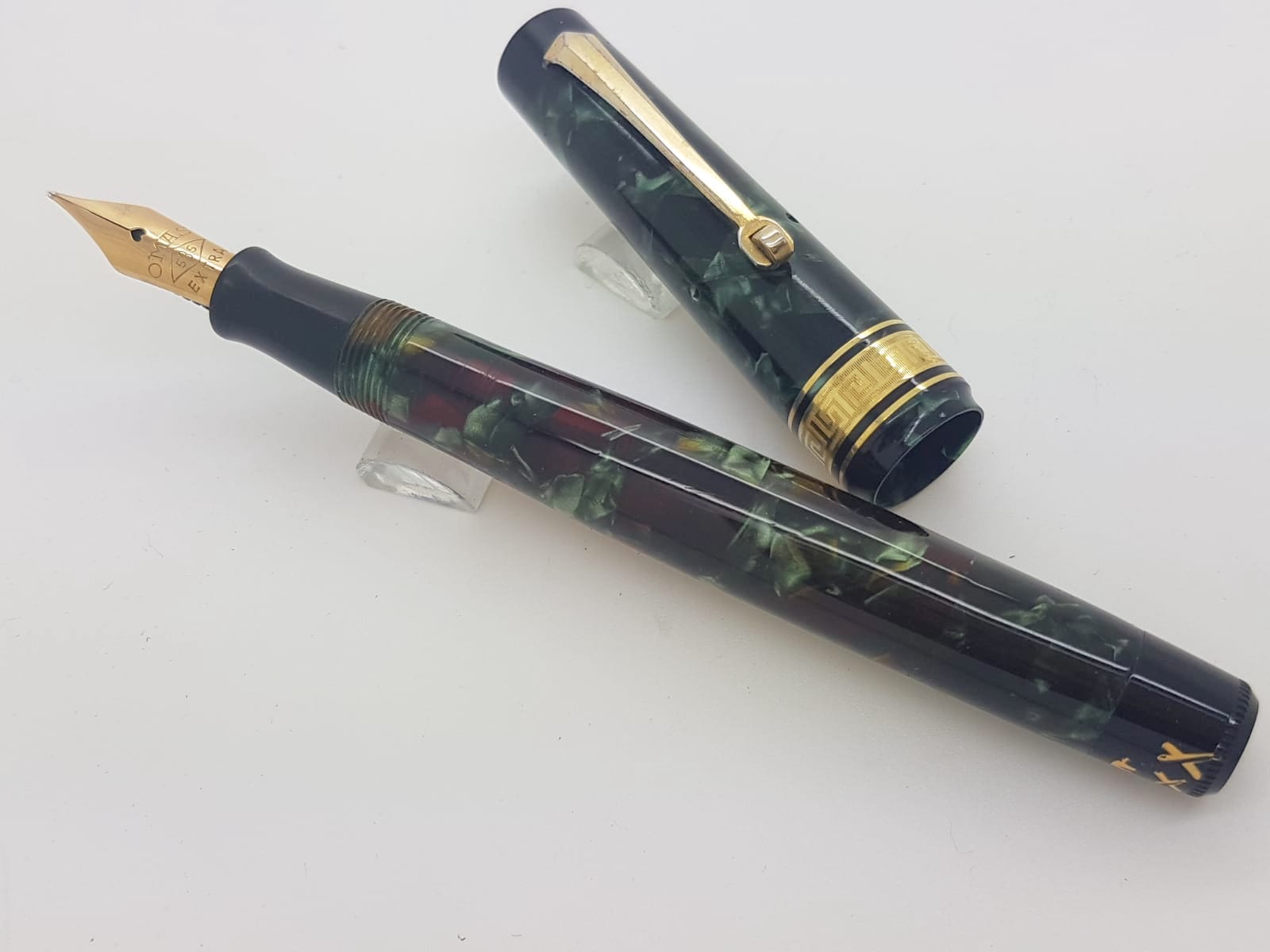 Black Lucens pens deserve a special notice as their barrels can have spiralled, longitudinal, horizontal lines which make their look very unusual, especially thanks to the very light transparency of the barrels.

The Lucens was not meant to remain on its own and the line was soon flanked by the Lucens Extra, later known as Extra Lucens.

This line of pens with facetted design had the same aesthetic features as the Lucens: transparent barrel, greek key cap band and roller clip. Meant to be the top of the range, the Lucens Extra was fitted with a two tone nib ( very similar to Parker’s Vacumatic nib) with the outline of an arrow. It was initially produced only in the medium size. 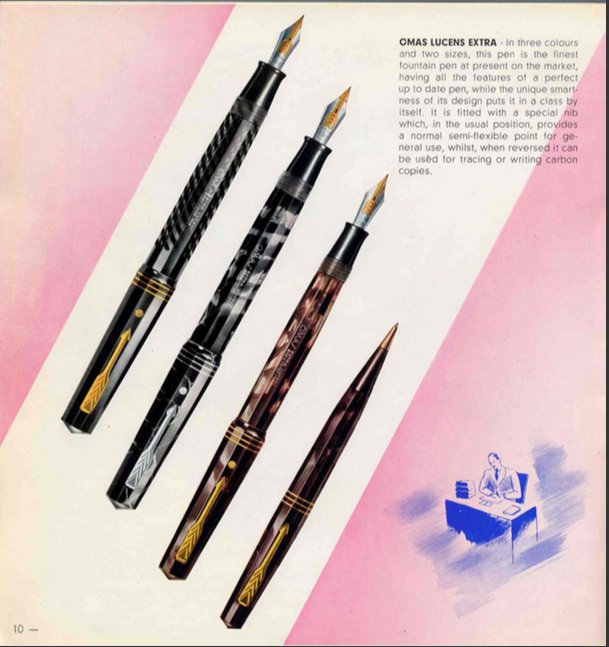 The arrow would become a further source of inspiration for Simoni  as he would adopt an arrow shaped clip for the Extra Lucens line in 1938, to match the outline on the nib. In the same year the Extra Lucens models were simplified and the greek key cap band was replaced by three cap bands.

In 1938, a small round logo was placed on the cap, just below the point of the clip, containing Armando’s Simoni’ initials. This small round AS logo is reminiscent of Wahl’s Gold Seal and appears as a  kind of  embellishment. 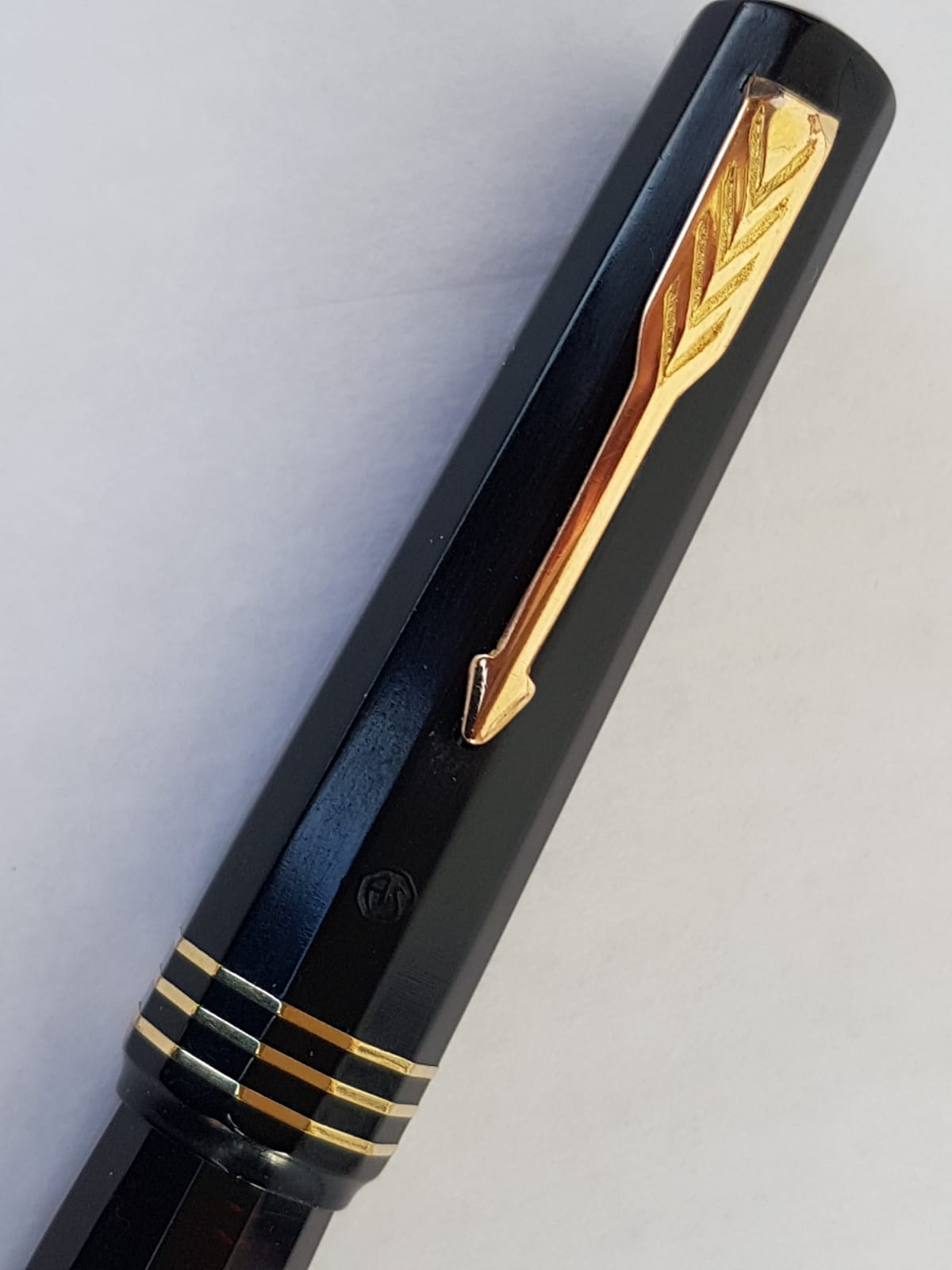 Throughout the 1930’s and 1940’s Extra Lucens pens were advertized simply as Lucens.

Permanio was an alloy Omas patented in 1941, which was advertized “as good as gold”. It was not true, obviously, as Permanio nibs were often corroded by ink acidity and could not offer the same pleasant flexibility as gold nibs. 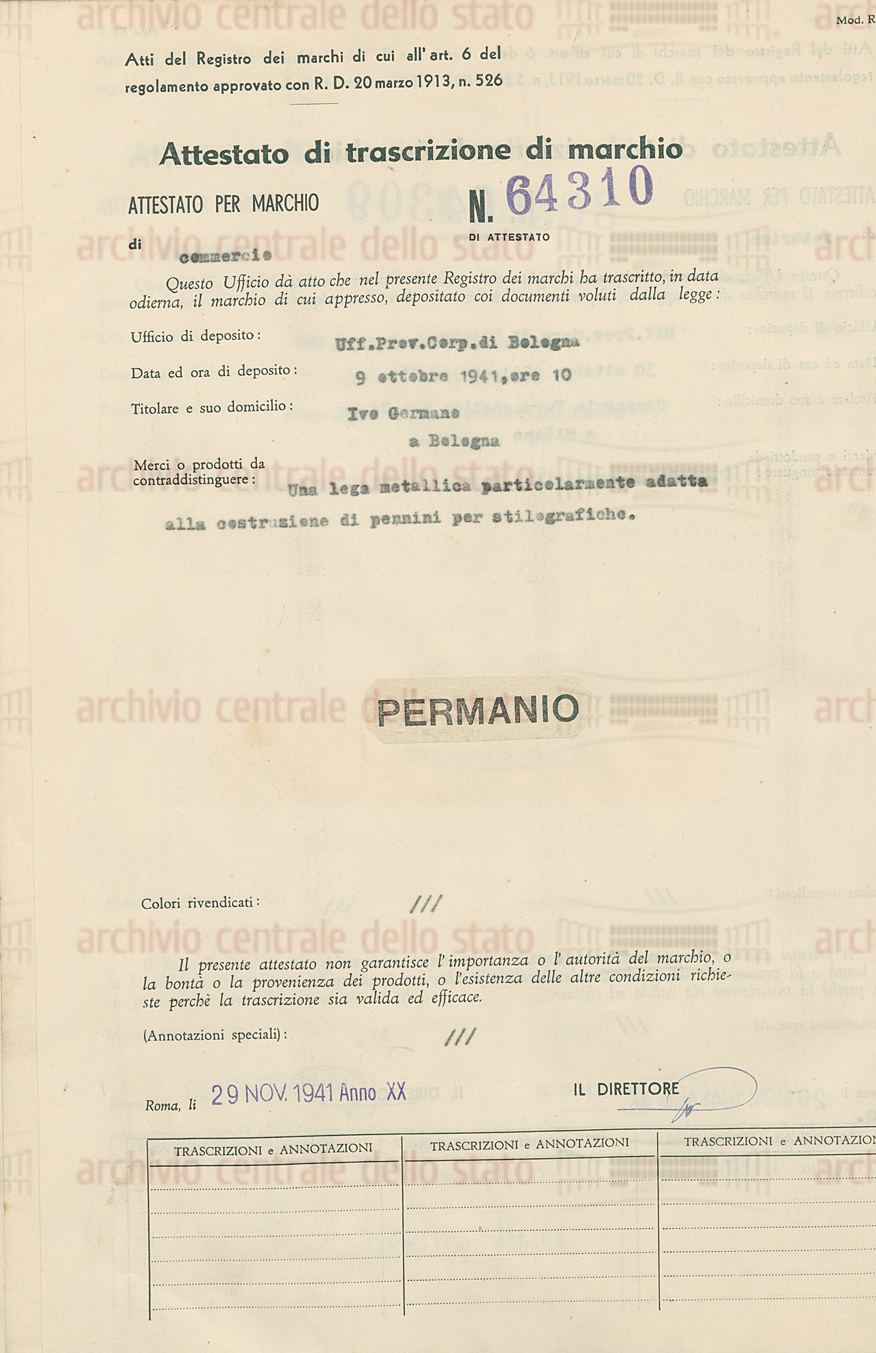 At the end of the war, Omas went back to gold for its nibs. The remaining stock of Lucens and Extra Lucens with chrome trim was marketed with gold nibs and it is not uncommon to find this match in many pens of this time, even if collectors mainly want to have Permanio nibs with chrome trim pens.

The 1940’s range of colors for the the Lucens and Extra Lucens was somewhat revised, with the addition of laminated celluloid both in gray and in green. The models remained practically unchanged till 1950 when Omas went through a total restyling of its line of pens. 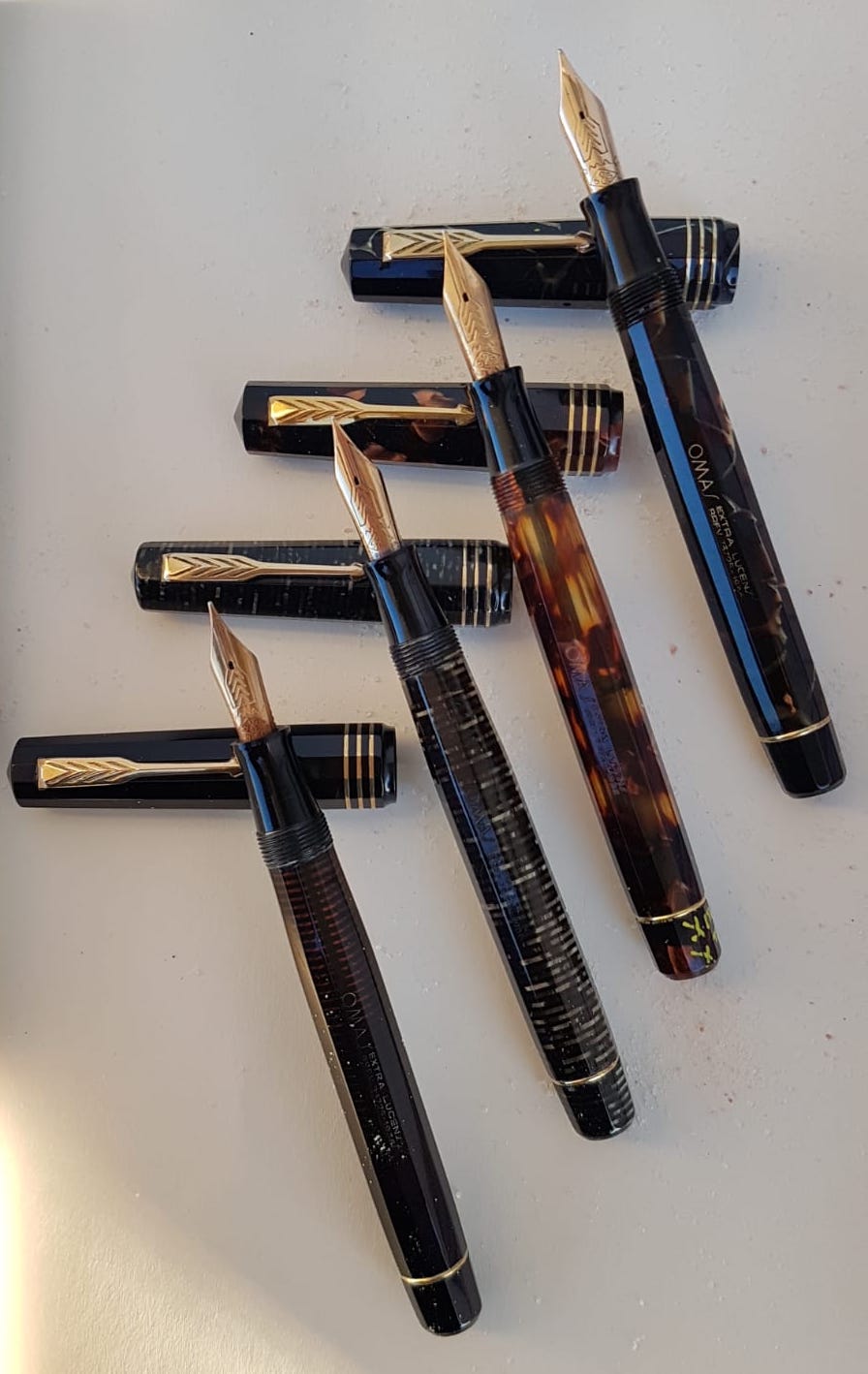 With the introduction of the more modern torpedo-shaped models, Omas completely transformed the Lucens line: the traditional design was abandoned in favor of a new tapered look, called “ogiva”. The new Lucens ogiva was produced in three sizes (catalogues show only two) with yellow or red transparency of the barrel in a very limited range of colors: black, laminated gray, laminated green and  with gold filled cap. 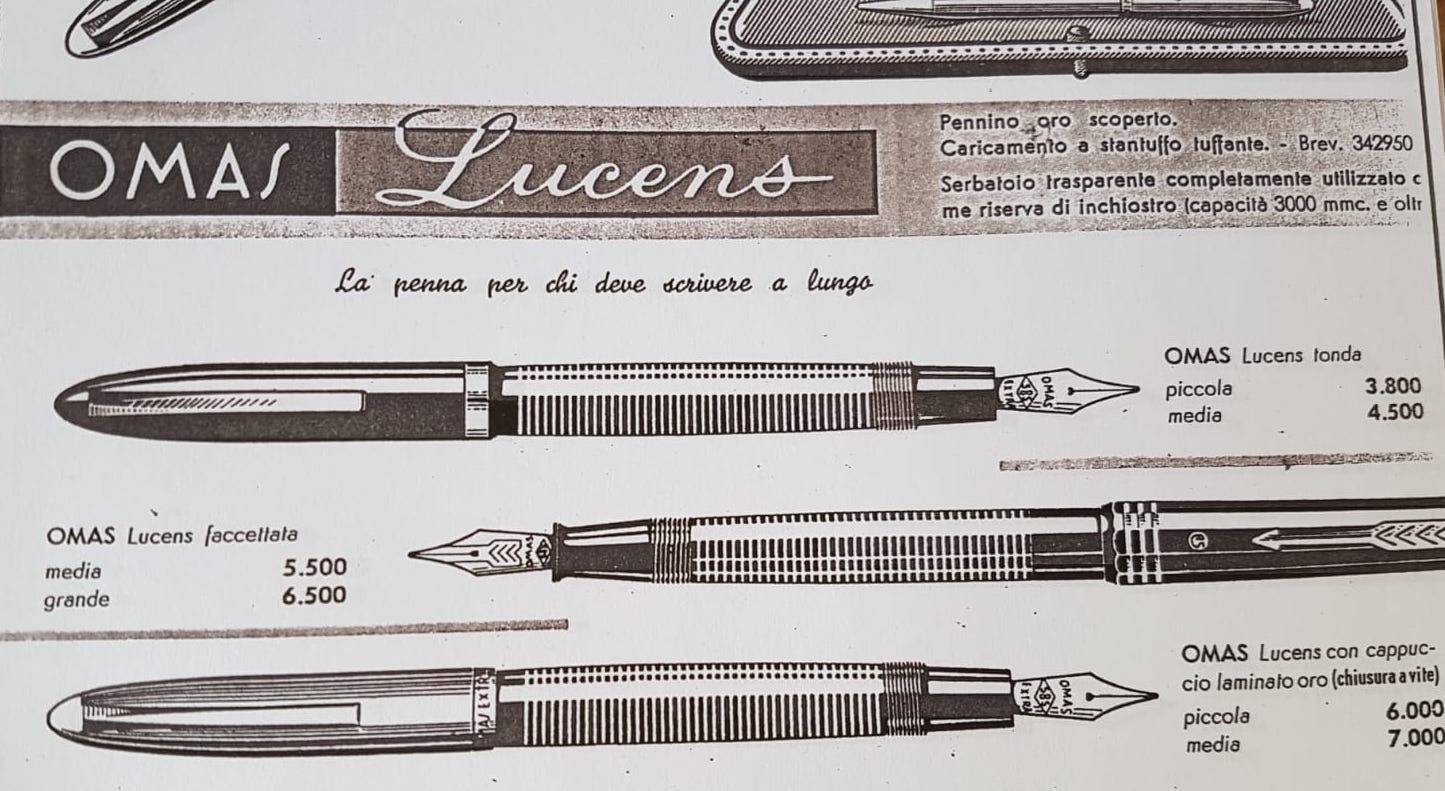 The Extra Lucens remained unchanged till the 1960’s, mainly produced in black or in laminated celluloid. It kept on being advertized as facetted Lucens, although the Lucens had totally changed its look. 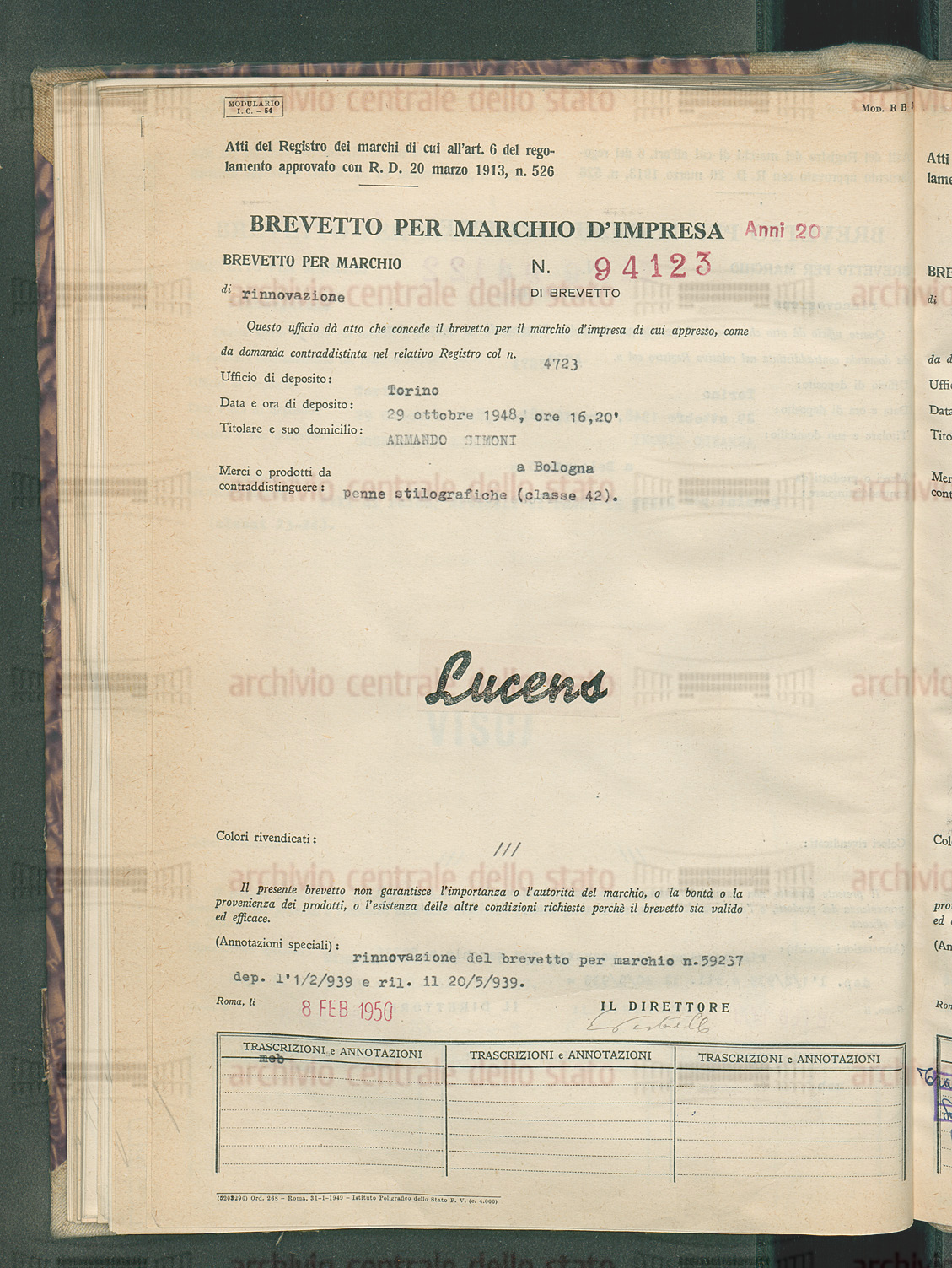 Instruction leaflet of the Lucens model. The black line where the material of the nib is specified , hides the word "permanio". Omas did not even care to reprint instruction leaflets at the end of the war and just cancelled off the word Permanio and replaced it  with 'Oro' (gold). 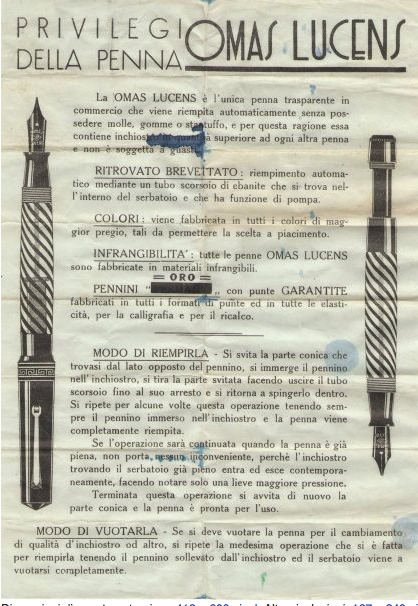 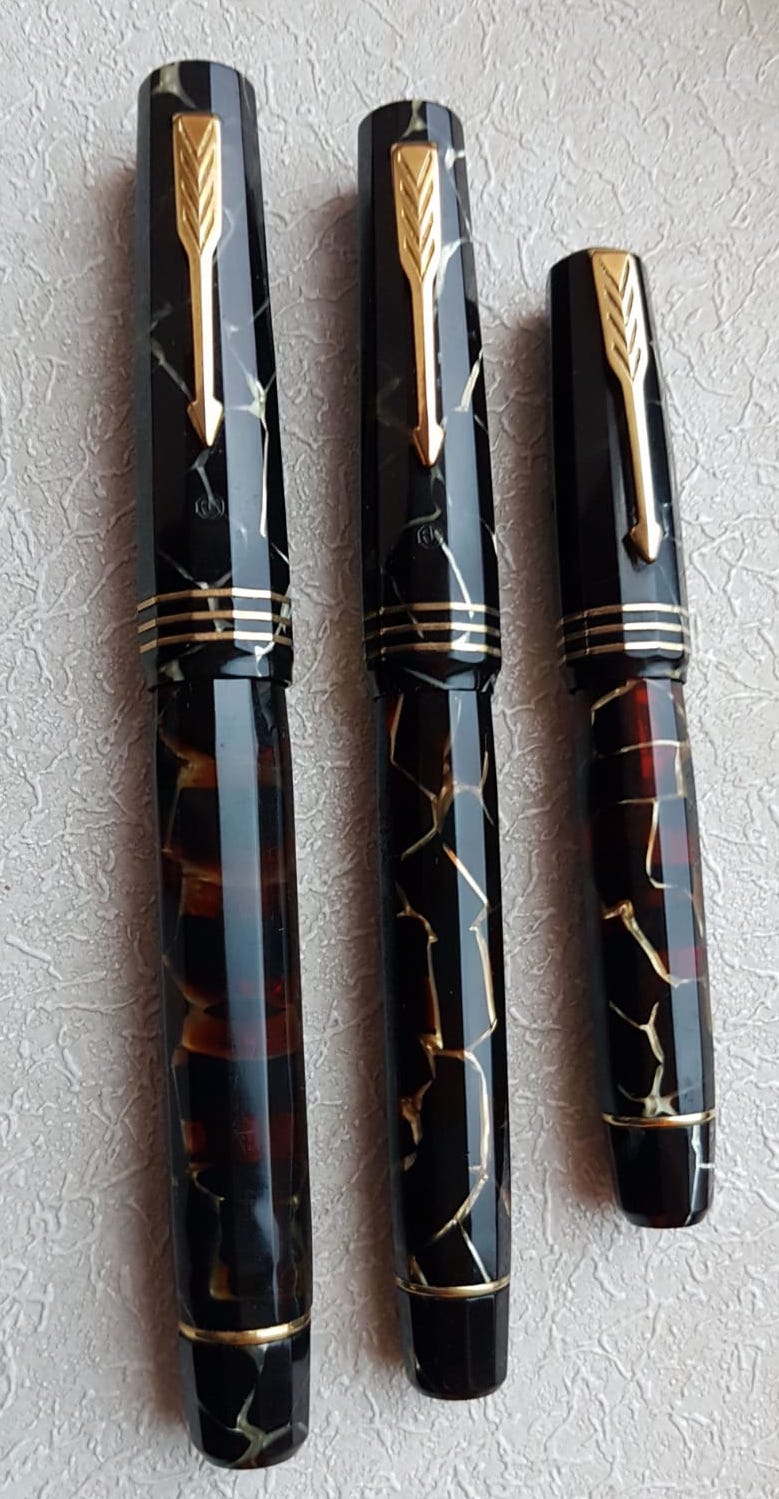 The range of nib grades offered by Omas in 1936. 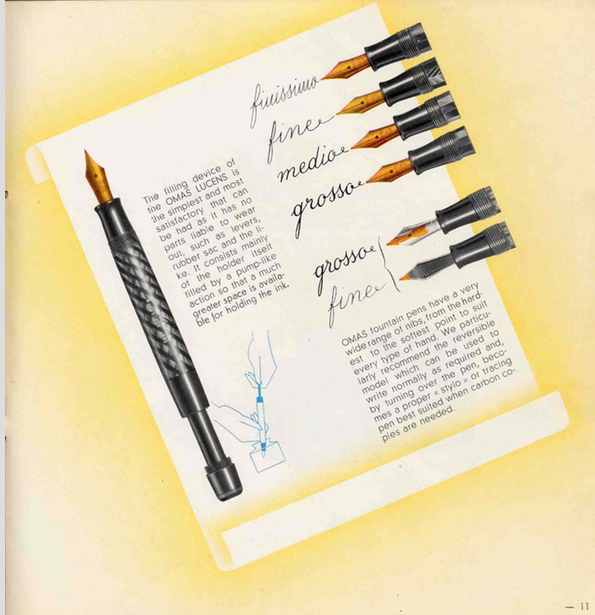